Too Many Conflicts of Interest on Eagle Ridge

Several members of the Lakewood Township Planning Board have conflicts of interest that prevent them from voting to approve the  project, according to board attorney John Jackson. Between those members with conflicts and two others who were unable to attend a Tuesday night meeting, the board did not have a quorum to vote on the development plan.

The current members are:

Here are the names of the conflicted individuals: 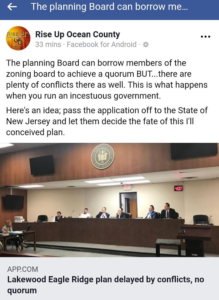 So Jackson rescheduled the project proposed by The Parke at Lakewood to be considered by the planning board on April 2. In the meantime, he said, he’ll continue evaluating other members for possible conflicts.

4 thoughts on “Too Many Conflicts of Interest on Eagle Ridge”