Profile: The Psychology Behind Shaul Mizrahi

Shaul ‘Saul’ Mizrahi was born in Brooklyn, NY, in the seventies to a respectful middle class family. As a young child, life was pretty good. Things started going sour when his father’s business took a turn for the worse. As a result, his suppliers were reluctant to give him credit. Eventually he declared bankruptcy.  His life was ruined.  This had a detrimental effect on his marriage which consequentially led to his divorce. Shaul’s mother could not afford to raise him alone. She had to ask her relatives for assistance.

When Shaul was a teenager, he pulled himself through Yeshiva. He made himself a promise that he will make something out of himself. Something big that will prevent him from ever going through similar shame.

In his twenties, as a youngster in BMG, he started doing repairs and small construction. His business grew. Eventually he left BMG. Shaul continued to make wise business decisions over the years, and his corporation became one of the biggest in Ocean County. Talking to a friend, he said, “When I was starting out, I never thought I would get this far. I was always just trying to do well for myself.” 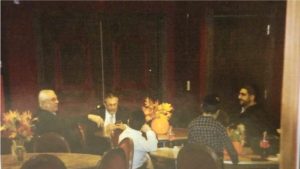 When he started off, he was in beis din very often. Many times his workers would do a sloppy job. Instead of compensating the home owner, he would go to beis din, force a פשרה, and pocket the difference.

When it came time to marry, he was not going to go for any name. He needed something with fame. He was going to prove to the world that he made it. Shaul got engaged to the daughter of a Rosh Yeshiva.

By now, Shaul is the biggest developer in the County. Still, you will not find pictures of him online. Shaul paid Internet professionals to have his pictures eliminated from the web or rank them as low as possible. He does not want unnecessary exposure. It scares him.

The one thing that drives him to grow bigger and bigger at all costs is the memory of his childhood. He says to himself “Never Again”.

5 thoughts on “Profile: The Psychology Behind Shaul Mizrahi”