On Friday, Judge Anne E. Thompson issued some bad news for Gilmore, who’s almost certainly the most powerful Republican boss in the state. She sided with prosecutors and decided that Gilmore won’t be allowed to call his psychiatrist, Steven Simring, to link his alleged hoarding disorder to alleged evasion of around $1.5 million in taxes, fees and penalties.

Gilmore’s attorney Kevin Marino told me Simring “would have provided valuable insight into George Gilmore’s state of mind, which is of course central to all the charges against him.”

“That said, we respect the court’s ruling to the contrary and look forward to proving Mr. Gilmore’s innocence at trial beginning tomorrow,” he said.

Thompson also sided against Gilmore’s attempt to stop prosecutors from detailing the types of things Gilmore spent money on — the model trains, Coca Cola machines, art pieces, infinity pools, etc., etc.Among some of the other purchases, which the Asbury Park Press reported were detailed on Wednesday: a limited-edition bronze statue of George Washington that cost $33,000; his 13,000-square-foot home on the water in Toms River, with custom furniture, an infinity pool and a cabana; and a $20,000 Steinway piano. 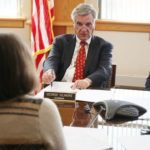 Gilmore pleaded not guilty Jan. 18, and earlier this week rejected a plea deal offered by the government. If convicted, Gilmore could face prison time and fines reaching hundreds of thousands of dollars.

His lawyer, Kevin Marino, has called his client a “spendthrift,” and said he “spent money like sailor on leave.” But Gilmore’s problems managing his finances do not make him a criminal, Marino has said.

On Friday, IRS officer Popowitz explained that business payroll taxes include withholding for employee’s personal income taxes, as well as both the firm’s and its employee’s contributions to Social Security and Medicare.

Popowitz said that Gilmore & Monahan’s repeated failure to deposit payroll taxes on time led the IRS to require the firm to submit a payroll tax payment form on a monthly basis, from October 2011 to September 2012.

The form indicates the amount of payroll taxes deposited. Businesses normally have to submit the forms once a quarter, she said.

But then the IRS discontinued the monitoring program, she said.

As soon as the program ended, Gilmore & Monahan again began falling behind on payroll tax payments, incurring fines of up to 10 percent if the payments were more than 15 days late, Popowitz said.

Except for the monthly payment period and “a couple of periods around 2013 where they may have paid it on time,” Gilmore & Monahan was “chronically late” depositing their payroll taxes, she said.

But in response to questioning by Gilmore’s lawyer, Marino, Popowitz said that all of Gilmore & Monahan’s payroll tax payments are now current, except for two quarters in 2016 and part of the last quarter of 2015.

In more than three hours on the witness stand Friday, Popowitz also provided details of her ongoing efforts to collect hundreds of thousands of dollars in delinquent income taxes owed to the IRS by Gilmore and his wife, Joanne.

She said she began investigating their personal income tax situation in 2012 because the IRS required her to review the personal taxes of all officers of firms that are having issues with the tax agency. 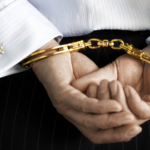 On Oct. 15, 2014, Gilmore sent a check for $493,526 from his OceanFirst Bank account to the IRS for payment of his 2013 personal taxes; he mailed it to Popowitz’ attention at her Freehold office.

There was only $2,413 in Gilmore’s account at the time he wrote the OceanFirst check, according to a photocopy of his account statement that Assistant U.S. Attorney Matthew Skahill showed to Popowitz and the jury.

Marino, said in his opening statement Tuesday that Gilmore had applied for a $650,000 loan from Two River Community Bank, and both Gilmore and his law firm partner, Thomas E. Monahan, were assured by a bank officer that they would receive the money.

Both Gilmore and Monahan wrote checks to the IRS that day, after speaking to the bank officer, Marino said. But the bank ultimately did not approve the loan.

She received Monahan’s check on Nov. 19, and then looked to see if Gilmore’s check had bounced.

Gilmore had been notified by the IRS that the check had bounced but had not sent another check to replace it, she said.

Popowicz said she met with Gilmore in person, both at the Gilmore & Monahan law office in Toms River and in her office in Freehold, spoke to him several times on the phone, and sent him letters warning that tax liens could be placed against his five Toms River properties if he and his wife did not pay their back taxes.

In 2016 and 2017, the IRS filed more than $1 million in tax liens for unpaid personal income and unpaid payroll taxes against Gilmore’s personal properties on Cranmoor Drive and Clinton Avenue in Toms River and Gilmore & Monahan’s 10 Allen St. headquarters.

Popowitz eventually did research on Gilmore’s properties in an attempt to find out the amount of assets he owned that might be used to pay off his tax debt, she said.

She determined in 2016 that the properties he owned, including his 13,000-square-foot residence on Cranmoor Drive in Toms River, had a $4 million value, against $2.5 million in mortgages.